With his wife away, Simon Hench, successful publisher and avid Wagnerite, is looking forward to a long, luxurious listen to his brand new record of Parsifal. But the sex problems of his unprepossessing lodger and his brother’s desire to share his anxiety over his prospects for an Assistant Headmastership turn out to be just the beginning of a string of interruptions which increasingly draw Simon himself into a vicious vortex of accusations and recriminations. 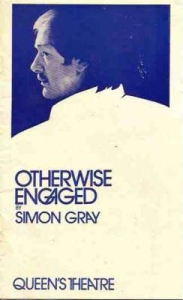 Otherwise Engaged was first presented on 30th July 1975, at the Queen’s Theatre by Michael Codron. The cast was as follows:

Alan Bates was replaced in the role of Simon Hench in the same production at the Queen’s Theatre by Michael Gambon, and the rest of the cast remained the same. The role was then taken on by Hywel Bennett.

US premiere of Otherwise Engaged

The US premiere of Otherwise Engaged was at the Colonial Theatre in Boston, on December 15th 1976. It then went to the National Washington Theater in January 1997, before opening at the Plymouth Theatre, New York, on 2nd February, 1977 where it ran until October 30th 1977. The cast was as follows:

Directed by Harold Pinter
Set Design by Eileen Diss
Costume Design by Jane Greenwood
Listen to an interview with Tom Courtenay on US radio recorded while he was performing in the original broadway production.

“In a wickedly humorous comedy, Otherwise Engaged, author Simon Gray recognizes over-communication as the roughage in today’s silken urbanity… Its literacy and humour aside, the pleasure here, as with any fine comedy, lies in its truth of recognition.”

“Otherwise Engaged … is a perceptive, funny and immensely entertaining play that becomes, almost imperceptibly, a corrosive portrait of a man who doesn’t so much live his life as come to an accommodation with it.”

“Mr Gray is wickedly good at satirizing contemporary London middle class society, especially in its literary and academic reaches. And curiously enough, despite the occasional differences of attitude, it is a society that has much in common with its New York counterpart.”

“I was going to say that if you could weld Simon Gray’s Otherwise Engaged to the last play of his we saw here, Butely, you’d have a double edged razor in your hand. Except that you don’t really need Butley to do it. Otherwise Engaged is double-edged all on its own and when its witty, wounding words are whipped about in the air like a blade held between forefinger and thumb, it glitters, buy cheap 2mg xanax fascinates and – in a mordantly comic way – frightens.”

“Simon Gray’s Otherwise Engaged would be poison at the drive-in and may even prove too special for Broadway. Bit watching Tom Courtenay as Gray’s purposely disconnected hero, one says: Ah, this chap we haven’t seen before. Since Gray and his hero share the same name, Simon, the plays can be taken as a comic self-study, even a confession. But Gray needn’t fear having said too much about himself. There are a lot of Simon’s around. Probably there’s a bit of him in everybody. It’s just that no one ever found a way to put him in a play before.”

In Otherwise Engaged Alan Bates inhabited the other side of the coin. Simon Hench sees his obligation as one of self-protection. He will not allow himself to be known. He defensive mechanisms are almost perfect (almost but not quite). His lethal wit is of another kind to Butley’s. He trips people up and lays them bear with a consummate delicacy, out of apparent compassion for them, as it were. The play is quite beautifully shaped. Alan Bates was again brilliant and Nigel Hawthorne uproarious as his brother Stephen.

Philip Purser, writing in the Sunday Telegraph on 31st July 1977, after the original production of Otherwise Engaged had been running for two years:

“Last night a play by Simon Gray called ‘Otherwise Engaged’ had been running in the West End for two years, which breaks no records (after all, ‘The Mousetrap’ has been with us for 24 years) but is remarkable – even significant it has been argued – for an uncomfortable comedy whose hero spends his time shrinking from any involvement with his fellow human beings… In a painstaking analysis of the piece in New Society a few weeks ago Colin Ludlow concluded that its appeal, the quality that has kept it running, lies in the secret longing of the audience to opt out in the same way. ‘Within the characters on the stage they see not themselves (that would be too painful) but something of the society in which they move, and for which they feel much the same distaste as Simon displays… Simon’s detachment and cynicism become extremely attractive.” Or to adapt the words which New Society used in its title to the contribution, has Simon Gray defined for all time the Hero of Our Time?”

Otherwise Engaged is now available as a Faber Contemporary Classic in Simon Gray: Plays 2. To order a copy on special offer at 25% discount please contact Faber using code GRAYPLAYS. Or check out the plays section of our bookshop.

Otherwise Engaged is also available in the following editions: