‘One day. There you’ll be, walking along on the surface, as always. One foot placing itself casually, unthinkingly, thoughtlessly, unwatchfully – hah! above all, unwatchfully in front of another, strolling coolly along you are, possibly, humming. Or humming eagerly along to where you go for your pleasures, or because you’re late for work, when suddenly – yes, quite suddenly, without the slightest warning – the ground opens at your feet.’

Mark Melon is a successful publisher and ruthless patron of family, friends and colleagues alike. In this acute and often very funny examination of memory at work, he recalls the events which led to his toppling.

Melon depicts a mental breakdown from the sufferer’s point of view. Middle-aged and, in his view, roundly encumbered by wife, family, friends and colleagues, Melon reacts with often hilarious outrage to a world apparently going mad around him. 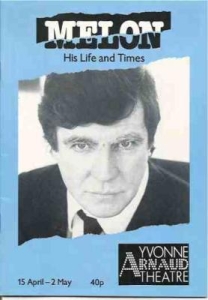 Melon was first presented at the Yvonne Arnaud Theatre, Guildford on 15th April 1987, and moved to the Theatre Royal, Haymarket on Tuesday 23rd June 1987. The cast was as follows:

“Melon is fascinating because of the muscular, witty quality of his dialogue, which Alan Bates, as Melon, delivers in bursts of staccato frenzy and hypnotic recall.”

The Sunday Times review of Melon

From Simon Gray’s introduction to Four Plays (Faber and Faber)

Of course I also told myself that it was too late to think about it, let alone fret about it, move on, move on, and I did eventually move on, writing another stage play and some television plays, until one day, long after Melon had closed, I found myself thinking about it again, then fretting about it again, then sitting down to write it again, and finally, after drafts and drafts and more drafts, I was in possession of a new play that was like the old play in its story and its characters, but so different in its narrative form that I felt that it required a title of its own. I finished the first version of The Holy Terror in the late summer of 1986. It was called Melon and like its successor was about a high-flying publisher who advocates promiscuity for his wife and himself, then has a nervous breakdown when he decides, against all available evidence, that his wife is having an affair with one of his best friends – which best friend being the conundrum that finally drives him mad. It was produced the following spring at the Theatre Royal, Haymarket, and played to good houses, thanks mainly to Alan Bates, whose performance as the brute Englishman with a chaotic soul was so dazzling that I suspected it flattered the text – anyway, there was a discrepancy between the story that the play told and the story that Alan told that made me feel, every time I sat through the production, that the play didn’t quite work.

The Holy Terror was first performed in October 1989 on BBC Radio Three in a fine production by Jane Morgan, with James Laurenson as Melon. In February 1991 I directed it myself, at the Temple of Arts Theatre in Tucson, Arizona, where it went well enough but straggled a bit, and needed work. A year later, revised somewhat, it opened at the Promenade Theatre in New York, in a production that you would have described as eccentric if you hadn’t known that the director drank quite a bit before each day’s rehearsals and quite a bit after them, and more than quite a bit during them, while never losing the conviction, however many times he stumbled down the aisle and tumbled over the seats, often with a lighted cigarette in his mouth and another, also lighted, in the hand that wasn’t holding the champagne bottle, that he was in full command of his faculties, and that his genius for cutting buy alprazolam 2mg through to the centre of things had never burned more fiercely – so, when he had trouble moving the actors around the furniture, he cut the furniture; and thus, when he had trouble deciding between different lighting effects, he cut the lighting.

So and thus, on the press night the audience found themselves confronted by unnerved actors performing in house-lights on a mainly empty set, and the actors could see not only the individual faces of the audience, but also the tops of the heads of the critics as they bent over their pads on their knees. The director himself, by the way, frightened, triumphant and drunk, was also highly visible and all over the place, now at the back of the stalls, now at the top of an aisle, now in the dress circle – if I’d been one of the actors I’d have stepped off the stage in the middle of my scene and murdered him, right there, under the house-lights, in full view of the critics: the report in the next mornings New York Times might have at least marginalised the review.

The producer, who was devoted to the play, made periodic attempts to fire him but was thwarted by his agent, who pointed out that as the director had playwright approval, and as the playwright and director were one and the same, it would be a question of asking him to fire himself, which he was unlikely to do, as he got on so well together. The Holy Terror lay dormant until about a year ago, when it was picked up by a London management. There are plans to produce it in the Spring of 2004, with Simon Callow in the lead…

Simon Gray reworked Melon into a new play, The Holy Terror: Melon Revised, first performed at the temple of Arts Theatre in Tucson, Arizona, in 1991, then at the Palace Theatre, Watford in a production starring Simon Callow.

Simon Gray on his inspiration for Melon, from his foreword to Stuart Sutherland’s book Breakdown: A personal crisis and a medical dilemma

“I came across Stuart Sutherland’s book, Breakdown, more than four years ago in a bookshop on the Charing Cross Road. I wasn’t looking for a book on a psychiatric subject, or on any subject in particular, as far as I can recall, but my eye was caught by Breakdown’s cover, and my fuller attention by the title, then by the biographical blurb inside, and then by the reviewers quoted on the back. In fact the process which led to my buying it was probably a classic exhibition, of the sort that publishers dream about, of the browser hooked. I opened the book when travelling home on the tube, and didn’t close it until I’d finished it some hours later in my study. About nine months ago I found myself writing a play – Melon – which was inspired (if I can use the word without seeming to hold Professor Sutherland responsible for the consequence) by the memory of certain events I’d retained from that reading.

It’s hardly surprising that I’d retained them, for Professor Sutherland’s story is an extraordinary one, made the more extraordinary by the contrast between the terrifying facts and the elegantly matter-of-fact tones in which he presents them. Outrages perpetrated by himself on others, by himself on himself, by others on himself; the most ghastly humiliations, private and public – all are reported lucidly and methodically, as if a version of Othello were being written from the inside by a man with a cool eye and a calm head. Almost, one might think, an impossible achievement – and certainly a chilling one. If such a thing can happen to such a seemingly self-possessed mind, who amongst us can call himself safe? The question echoes the question posed by Oedipus. Professor Sutherland’s personal history reminds us, the more bleakly for being stated in such uncompromisingly modern terms, that there is only the one answer.

Melon is published in the following editions: